The Real Meaning of Shakespeare’s Quote, "To Thine Own Self Be True" from Hamlet 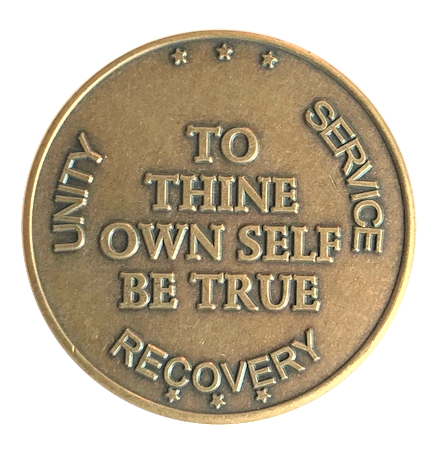 The12-step program is arguably the toughest test of any recovering alcoholic’s life. It demands you to bare yourself in the mirror and in front of the world. This is especially true for the AA meetings, where you are asked to be honest. And rightly so! Honesty is one of the four absolutes of AA - the others being purity, unselfishness and love. These absolutes navigate your recovery process. They are your guiding light and help you from straying away from your goal.

As you are aware, Shakespeare pronounces his views on honesty through Polonius in Hamlet. “To thine own self be true. And it must follow, as the night the day, Thou canst not then be false to any man,” he writes. Centuries later, we still recognize these lines as the exemplars of life. However, since Polonius’ character is political, the real meaning of the quote can be misinterpreted. For him, honesty is satisfying his personal materialistic needs by being true to himself. It, then, doesn’t matter how the world perceives him.

As a recovering alcoholic, however, you have a larger role to play. Therefore, you must be unselfish. And you mustn’t fail yourself or your loved ones throughout your recovery process. It is essential to be honest to restore your life. Through honesty, you learn acceptance. And acceptance is the first step to taking charge of what you have lost due to being powerless. Being true to yourself is the only way to attain absolute control of the problem – alcoholism.

That’s where the‘to thine own self be true’ coin emerges from.

The History Behind Using Polonius’ Wisdom for the Medallions

Contrary to the popular belief, the quote is not a biblical reference, rather a Shakespearean one. While the origins of the quote’s usage are difficult to trace, it is believed to have started from an open AA meeting in Delaware. The man, who substituted the speaker of the event, was one of the 300 attendees and spoke on the theme of ‘honesty with one’s self.’ He addressed the meeting with the famous quote from Hamlet and went on to explain the importance of sincerity to recover from alcoholism.

While this happened in the late forties, the medallions have been given to recovering alcoholics since the 30s. Sister Ignatia presented alcoholics with a coin or a chip to reward them for achieving their milestones. The medallions acted as positive reinforcement because they also served as a mark of promise. And each time a recovering alcoholic would give in to their desire to consume alcohol, the medallion would be taken away from them. With time, both these instances were combined.

Polonius’ quote is used to mark the first 24-hours of sobriety because they are the most crucial ones. Also, attending the first AA meeting is a sign of being true to yourself. So, even though the‘to thine own self be true’ coin is not originally a part of AA, it is now accepted in the culture.

Authenticity Plays An Important Role In Your Recovery

It is extremely difficult to be authentic all the time. But it is worth so much more than just knowing that you are mindful of what you do. According to psychologists, being true to yourself helps you feel pure about yourself. It encourages you to help others. Living authentically allows you to be selfless and do things for other people. But for this, you must also bring in consistency throughout your actions.

As Shakespeare explains, being honest has to be a continuous effort. Just like the night follows the day, you must keep the cycle going. Remember that being honest doesn’t only mean being accountable for your actions but also following your principles. The‘to thine own self be true’ coin is a symbol of your authenticity. It must be earned and when you do, you must try not to let your desires get the better of you.

It Is Important to Earn Your Medallion to Live Better

Your medallion is a mark of your sobriety. You receive one each time you achieve a milestone. So, it goes without saying that earning your medallion takes commitment and courage. However, the thing about AA groups is that nobody knows whether you are lying or telling the truth. You are free to admit to things you have or haven’t done. So, you can actually lie to earn your first coin. But would that justify the real essence of pocketing a ‘to thine own self be true’ coin or even necklace?

Addiction is characterized by compulsive use of a substance despite knowing the consequences. You do it because you feel better and enjoy the momentary ‘high.’ But being honest actually makes you happy in the long run. It doesn’t just temporarily make you feel better but is an excellent way to go through life. Practicing honesty can help you relieve stress, simply because you spend less time covering your traces and more on focusing on your well-being. Since honesty is important to get a ‘to thine own self be true’ coin, earning your medallions can help you live better. Not temporarily, but permanently.

Find Your Purpose and Give a New Meaning to Your Life

One of the most common reasons for addiction is low self-worth. People tend to abuse substance when they have low self-esteem. Besides, a lack of goals in life can also influence your decision to abuse alcohol. Fortunately, studies have repeatedly shown that goal determination can help you keep yourself off of drugs. Choosing a purposeful life can allow you to overcome alcohol abuse because it helps you focus on a different aspect of your life.

While some people find solace in religion, others turn to a spiritual lifestyle to recover from their addictions. Similarly, some do neither and find their purpose in humanitarian activities. It allows them to feel like a useful part of society as well as continue to validate their medallions. Anything that makes you feel important or wanted can be your life’s purpose. But it is essential to have an aim to get through life in a much healthier way than you have until now.

Lastly, you must continue to strive to be the real you, rather than being the society’s version of you. Because that’s what your‘to thine own self be true’ coin is about. If you are fighting to overcome your addiction, congratulate yourself for not giving up. We believe in you!