Entering sobriety can feel difficult enough for alcoholics, even when they strongly feel the need and desire to kick the habit. Maintaining sobriety, especially at the beginning, can feel even more difficult. One of many factors that contribute to this difficulty is that staying sober can seem like a rather abstract achievement. There is no finish line — only an ongoing effort.

Long-time members and group leaders in Alcoholics Anonymous (AA) understand the struggle from personal experience. That is why many groups have adopted a tradition that makes the achievement more concrete. Here is some information on AA medallions and how they celebrate sobriety.

An AA medallion is a token that Alcoholics Anonymous members receive to mark the passage of certain amounts of time since they consumed alcohol. The medallions themselves are often small in diameter — about the size of a poker chip. AA medallions tend to come in a variety of colors, with each one representing a different amount of time that the recipient has spent sober.

Many feature designs with one side showing the amount of time that the medallion represents, encased within the famed Circle and Triangle symbol. The words “Unity,” “Service,” and “Recovery” are etched along the outside of the triangle, and the phrase “To Thine Own Self Be True” float along the perimeter. The other side often includes a smaller circle containing an even smaller triangle. Surrounding the circle is the text of AA’s Serenity Prayer, which reads as follows:

“God grant me the Serenity to accept things I cannot change, Courage to change things I can, and Wisdom to know the difference.”

We should note that the Fellowship does not require groups to give out these coins or even have any rules about their use. This leaves individual groups to observe their own customs, though many of them follow common traditions. We will strive to describe common traditions throughout the article. With that said, you do not need to implement all of them, nor do you need to implement them exactly as written.

Many attribute the origin of the AA medallions to Sister Mary Ignatia, the nun who a key figure in the beginning of AA. She worked closely with Dr. Robert Smith, also known as “Dr. Bob” and co-founder of the organization; and she treated thousands of alcoholics at the St. Thomas Hospital in Akron, Ohio, where AA was founded. She achieved many feats and started many traditions that influenced how the Fellowship and its groups operate to this day.

Sister Mary was known for giving her patients a Sacred Heart badge upon their release. She made them promise that they would return the badge if they ever had another drink. It served as the symbol of a promise that a recovering alcoholic would make, not simply to God, nor to the nun, but to themselves.

With that said, Sister Mary would only give one badge to each patient. The idea of a more elaborate system itself dates back to 1942, from a person only known as “Doherty S.” This person founded their own group in Indianapolis that utilized AA’s practices, and they created some of their own — such as handing out medallions. They mentioned awarding “tokens” and “chips” in a letter to William Griffith Wilson, also known as “Bill W.” and the other co-founder of AA.

The Meaning of the AA Colors 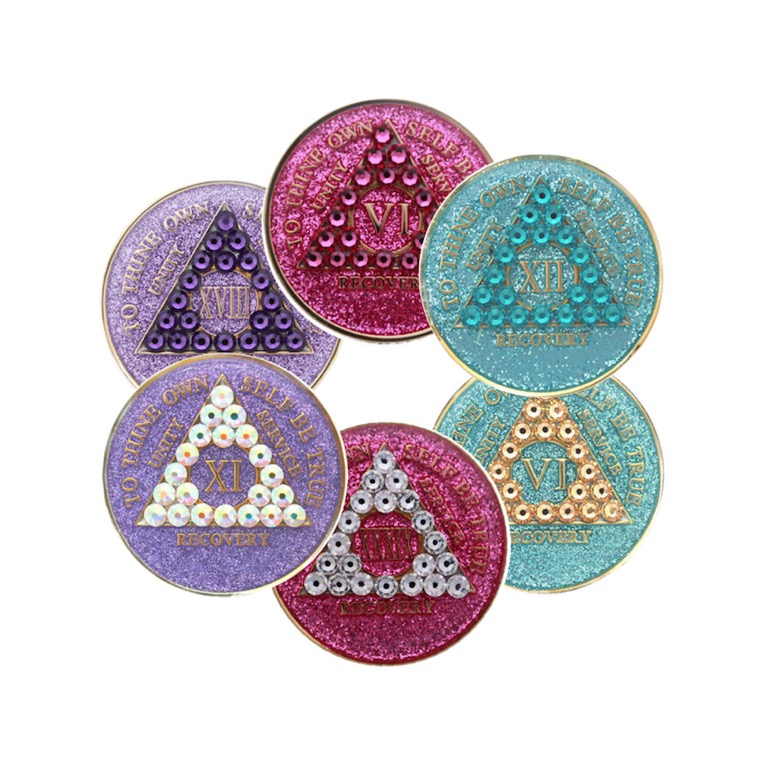 AA medallions come in a veritable rainbow of colors. Each one stands for a specific number of days, months, or years since the AA member last touched a drop of alcohol. As we said earlier, different AA groups will have different practices. As such, they may assign the colors with different meanings than other AA groups.

We can at least say with certainty that the overwhelming majority of groups will give members a silver chip after a full 24 hours of sobriety. This gesture may seem small, but it represents the start of their journey away from alcoholism. Customarily, red medallions typically stand for a full month without returning to alcohol. Gold chips, curiously enough, is awarded after two months, while green chips come after three. The badge marking the half-year point is blue, while the one representing nine months is purple.

All of the AA medallions mentioned above are silver-plated or made from aluminum. However, the ones that people receive on their “sobriety birthday,” one entire year of an alcohol-free life, is made from and colored like bronze. According to tradition, every chip from this point onward is also made of bronze and handed out on an annual basis.

One Day at a Time

A group can choose any number of ways to mark the time their members go without alcohol. They can even decide against this, for one reason or another — as we said, AA does not require it. With that said, the measurement of that time and the celebration of milestones can do wonders for members. For an alcoholic in the throes of their addiction, going one month or even one day without the substance seems impossible. As such, going for any amount of time without it is worthy of celebration.

Even if your group does not hand out AA medallions, you may want to get them for yourself once you earn them. They serve as reminders of a personal pledge to improve your life with temperance. Each one represents achievement, determination, courage, and hope in the face of an ongoing struggle. There may not be a finish line, but there can still be trophies.

AA does not provide any of these badges through their organization, online or otherwise. That is why Pass It On Recovery Shop offers a diverse array of exquisite AA medallions, most of which bear the traditional designs. You can get them in just about any color, even camo pattern aa coins , and for extensive amounts of time. Check out our selection and order them today, whether for your fellow AA members, a loved one, or yourself.